#TBT to the 2012 Kentucky Farm Bureau Ham Breakfast when Congressman (former Ag Commissioner) James Comer and Senator Rand Paul met on stage with other hemp leaders to speak out in support of the proposed new hemp industry in the Commonwealth! ????????

This press conference was early in the morning before the State Fair festivities began…but the message they presented went far above and beyond anything that we were able to do on the grassroots level. Commissioner Comer and Senator Paul were two of Kentucky’s hemp rock stars who took hemp to a new place, elevated the conversation, and helped pave the way for a hemp bill to sail through the legislature nearly unanimously! 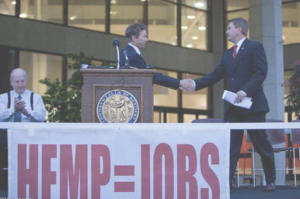 Our platform at the time was Hemp = Jobs. We repeated that mantra over and over throughout the year and into 2013 when we eventually passed legislation and succeeded in winning a difficult battle to bring hemp back to the Commonwealth. Our deepest gratitude goes out to these two for standing up for Kentucky farmers and small businesses back before it was cool ????✨ #kyproud #hemp